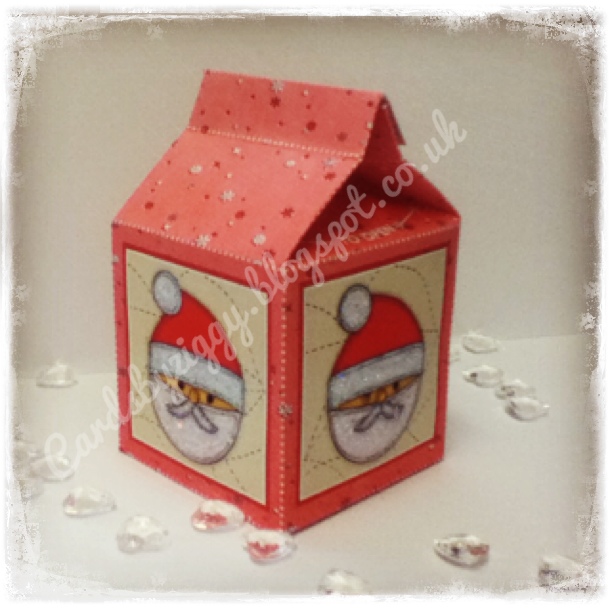 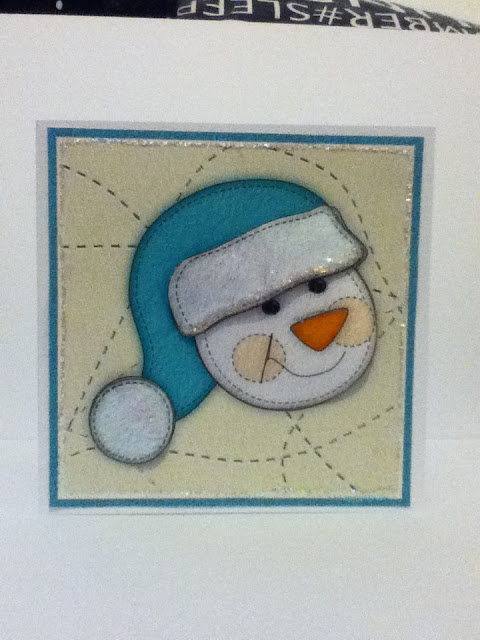 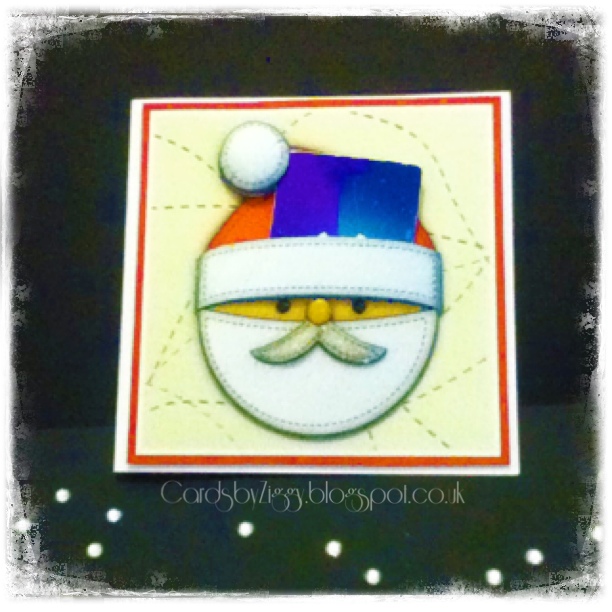 Got my promarkers out today

I was trying to tidy my craft items and came across my trusty promarkers.  I haven't done any colouring for months and was a little apprehensive about starting again (so I picked out an image that I had previously coloured so I had a reference picture)

I printed out one of my favourite digital stamps from Anonymous stamps the walking boot and added a beautiful digital background from my trusty craft artist.

I think the final card topper has turned out ok. 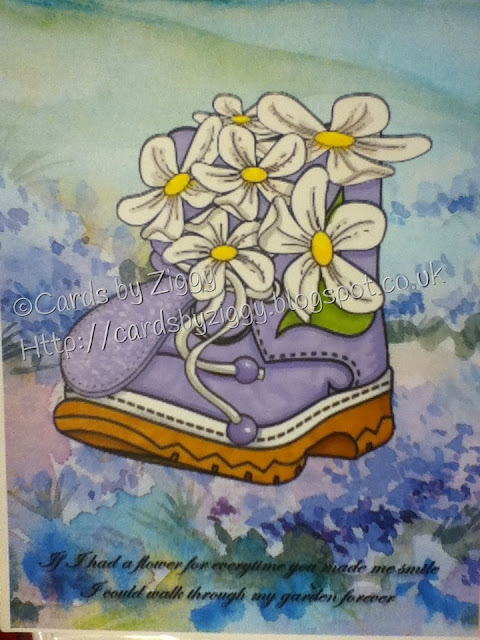 Would love to know what you think. 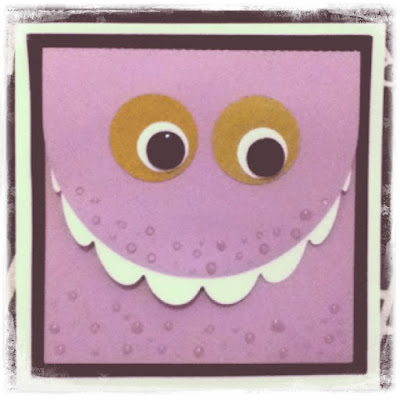 Another day another crafty make 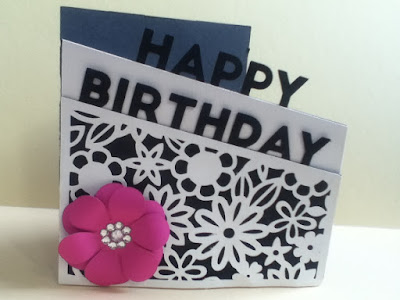 Well it's been another very busy week in our house.  I love the school holidays, but it takes alot of effort to entertain the boys.

Today's card is a very simple one by my standards (not many diamante on this one).

I started with the basic shaped card element from one of my favourite designer's Birds Cards, and then created a shaped matting layer from one of her background files.  I loved the look so much I made it in a couple of colourways.  (My favourite by far is the black/white/pink) 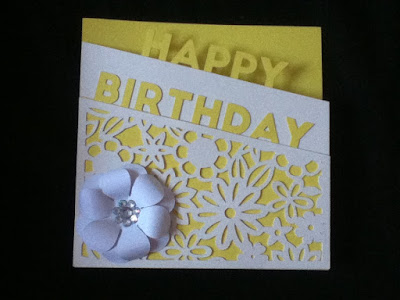 I would like this card design to be considered in the following challenges:

Well not been on here for a couple of days (family stuff, and they have to come first)

Today's card is yet another sparkly number I love making cards using diamante.  For this card  I took an image from My Craft Studio with the words Mr and Mrs on and cut it out of both black and white card-stock, then matted the white onto the black to give the element a shadow effect. I then got out my 4mm clear diamante and stuck them over the word element of the Mr and Mrs cut out (each stone is stuck on individually).  I then printed a free bride and groom image on the right hand edge of an 8"x8" (I think this was a free image from the papercraft inspirations website).  The final step was to stick the Mr and Mrs cut out on the left hand side of the card.

I was really happy with the final result, I would love to here what you all think of it.

I would love this card to be considered for the following challenges:
The Crafty Addicts - Anything Goes/Emboss It!!
Inspiration Destination - #98 Always Anything Goes 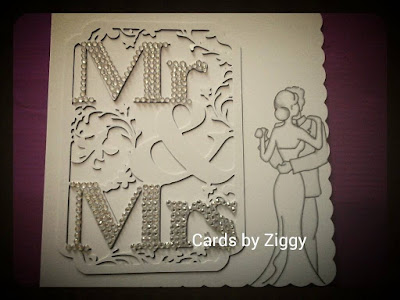 Sparkly Pink for a Guy!

Well as a few friends know I make cards as I was asked if I could make a card for a man that was pink, glittery and sparkly.  Sure I can do that was my immediate reaction, but then the reality set in, what sort of themes for a man would lend themselves to being made in pink.

Never fear good old Birds Cards free background cutting files will help me out.  I know she did one that was like a brick wall so I downloaded the file, the only problem was that it was for a square card so using my trusty inkscape I managed to increase the size of the wall to A4, then I thought what guy doesn't like superheroes so I made an explosion in the center of the wall and added the words sorry you are leaving, I combined the explosion with the wall background and cut it out of white cardstock, which I then layered of the top of some pink glitter card. (this card is starting to look very pink)  The final touch was to add the recipients name which I created using the font Pacifico cut out of white cardstock with a matting layer of pink and highlighted with clear 4mm diamanté. 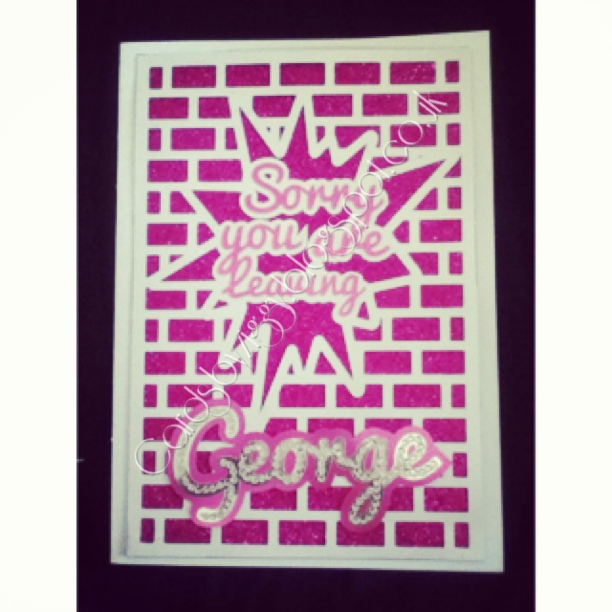 I think you will agree it ticks all the boxes I was given.

I would love this card to be considered in the following challenges:

Anyone who knows me knows that I love anything that's glittery/sparkly,

So I took the Happy Birthday 2U  file from Birds Cards cut it out in white with a silver base layer and  then added some 4mm clear ab diamanté to the 2U element of the design.  I then stuck this onto a 6inch square card, I feel the result is simple but stylish.

I would like this card to be considered in the following challenges: 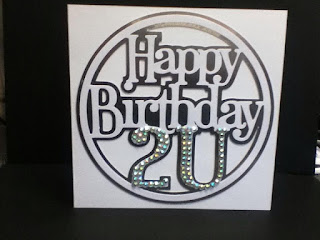 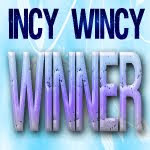